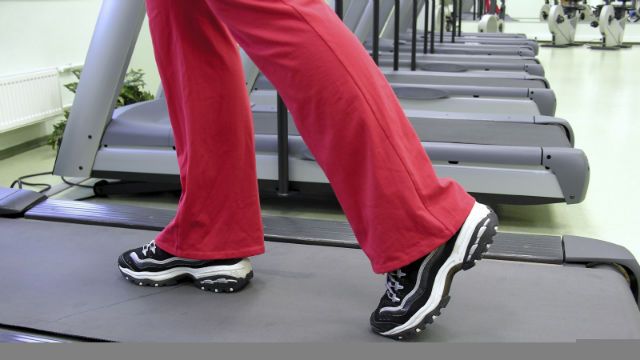 Sometimes hitting the treadmill can make you feel like you’re dying, but did you know that your exercise patterns on the treadmill could be a predictor for your risk of dying?

Predicting your risk of death

A group of cardiologists at Johns Hopkins recently used the recorded data from 58,000 heart stress tests to create a formula for predicting an individual’s risk of dying over the span of a decade based on their treadmill performance.

Factoring in an individual’s physical ability to exercise at increasing speeds and inclines on a treadmill proved to be crucial in predicting an individual’s heart health. The new formula, or algorithm, is being called the FIT Treadmill Score and is based solely on treadmill exercise results.

This scoring differs from other previously established methods of fitness evaluation and short-term death risk predictors, which calculate scores on patients with already established heart problems. Previous methods also incorporate many different variables from a variety of tests such as electrocardiograms.

“The FIT Treadmill Score is easy to calculate and costs nothing beyond the cost of the treadmill test itself. We hope the score will become a mainstay in cardiologists and primary clinicians’ offices as a meaningful way to illustrate risk among those who undergo cardiac stress testing and propel people with poor results to become more physically active.”

The FIT Treadmill Score factors in an individual’s gender, age, and peak heart rate measured while performing intense exercise, as well as their tolerance for physical exertion, as shown by metabolic equivalents (METs). METs are a way of gauging the amount of energy expended by someone’s body while exercising.

It is not surprising that higher energy outputs, or METs, correspond with more vigorous activity, as do a higher fitness level and improved tolerance for exercise. An activity like running equals eight METs, compared to slow walking that equates to two.

“The notion that being in good physical shape portends lower death risk is by no means new, but we wanted to quantify that risk precisely by age, gender and fitness level, and do so with an elegantly simple equation that requires no additional fancy testing beyond the standard stress test,” explained lead researcher Haitham Ahmed, M.D., M.P.H., a cardiology fellow at the Johns Hopkins University School of Medicine.

A new standard for fitness measurement

The researchers who performed the study feel the new scoring system provides valuable clues to an individual’s health that should be determined for all the patients that participate in cardiac stress testing each year.

To date, exercise stress tests were only conducted until the point where an individual became exhausted or developed chest pains, heart rhythm abnormalities, or dizziness. Abnormal findings meant referring an individual for further testing through an invasive angiography. People whose findings were labeled “normal” were considered fit, and further testing was ceased.

Researchers from the study explained that there are varying degrees of actual fitness among stress tests results that were labeled “normal”. These differences can give important clues about respiratory and cardiac fitness that can be used to calculate an overall death risk.

“Stress test results are currently interpreted as ‘either/or’ but we know that heart disease is a spectrum disorder,” explained Ahmed. “We believe that our FIT score reflects the complex nature of cardiovascular health and can offer important insights to both clinicians and patients.”