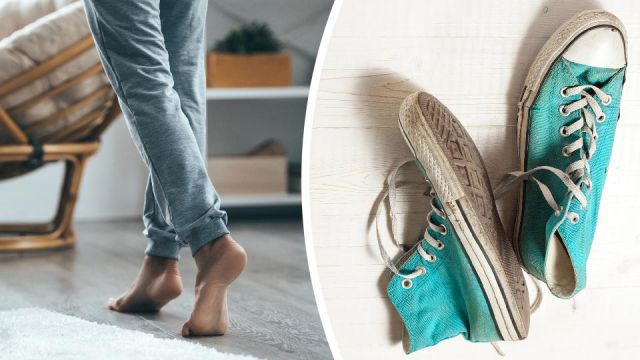 Your home might be your castle, but that doesn’t mean you have to treat it like some kind of dirty medieval fortress. Taking off your shoes inside can help keep your home in good condition, create a more relaxed atmosphere and cut down on dirt and dust.

However, that’s barely the beginning; keeping those shoes off inside can improve foot health, and overall hygiene around the home. So after reading these top seven reasons for why you shouldn’t wear shoes inside, you’ll probably agree there is pretty much no reason to be keeping those clompers on indoors.

Excuse me for indulging in an argumentum ad populum, but it’s worth pointing out that taking your shoes off inside doesn’t make you some kind of pedantic oddball. On the contrary, you’re weird if you don’t, according to this survey that found 87 percent of Americans take their shoes off indoors. You might be a bit surprised by that figure.

“But wait,” I hear you say, “none of my friends make me take my shoes off at their houses!”

That’s true. Indeed, the same study found around half of Americans don’t ask guests to follow suit. Naturally, this goes a long way towards explaining why everyone seems to think they’re the only ones who go barefoot indoors. The reality is though, that pretty much everyone is already doing it, and you just don’t know it.

2. Your shoes are disgusting

Sorry, but it’s true. Research from the University of Arizona found that a new pair of shoes can attract 440,000 units of bacteria within two weeks. Not only that, but researchers also noted that viruses thrive better on the bottom of your shoes than they do on toilet seats. So your shoes are basically Trojan horses laden with bacteria and viruses, clumping around your supposedly clean house.

3. The disgusting-ness of your shoes is getting everywhere

At this point, you might be wondering if it’s really that bad to wear dirty shoes inside.

Turns out it is. Remember that research from in #2? Those same researchers also looked at just how much bacteria is transferred from shoes to clean surfaces.

On clean tiles, researchers found a 90 percent transfer rate. If you think that’s bad, then don’t even think about carpet. Still, you might think that’s no big deal; indeed, most of the time it isn’t. However, according to Jonathan Sexton, a research assistant at the University of Arizona’s College of Public Health, the research indicates that wearing shoes indoors could be downright dangerous for small children.

Speaking to ABC, she explained that small children can put their hands in their mouths as much as 80 times an hour — those same hands they tend to play on the floor with. “That means that your child can possibly be exposed to every single bacteria that you picked up on your shoe […] all the bacteria from the park, the store, everywhere you went that day,” she said.

Not horrified yet? Well how about the fact that…

We all know that depressing feeling when you sink your foot into some dog-do. Next time it happens to you, take solace in the fact that we’re all walking around with poo on our shoes. All day, everyday.

After all, that was pretty much the finding of a research project commissioned by the Rockport shoe company (make what you will of that) into just how gross shoes are. As the company discovered, basically the first thing us consumers do when we get hold of their product is — you guessed it — step in poo.

After swabbing 26 shoes worn for at least three months, researchers found all but one pair were infected with coliform bacteria. For the record, coliform bacteria is universally found in the gut and feces of large mammals (like for example, human beings with poor hygiene). While the bacteria aren’t dangerous in themselves, they are often used by health authorities to gauge whether something has been contaminated with fecal matter.

Even the researchers were grossed out by just how much evidence of fecal contamination they found on ordinary shoes. “I’m starting to make myself paranoid,” microbiologist Charles P. Gerba said. “It seems like we step in a lot more poop than I thought.”

Poo isn’t the only threat to your health that your shoes pose indoors. Noise pollution can be genuinely harmful for your health. what’s the noisiest thing in your home? Boots, obviously, but shoes in general. So do yourself and everyone around you a favor, and trade those noisy shoes at the door for some silent slippers.

6. They are destroying your floor

Your shoes are destroying your hardwood floor. Or any even vaguely delicate flooring. Over time, shoes can leave scratches, dings and scuffs that can be expensive or impossible to remove. Save yourself problems in the long run, and just don’t wear shoes inside.

7. Your feet will be healthier

Somehow, all our technological progress of the past 2000 years has succeeded in making our feet worse off — well, not quite everyone’s. Of the modern humans, the Zulu participants had the healthiest feet. The Zulu participants were also the least likely to wear full closed-in shoes in their daily lives, and most likely to go barefoot.

Researchers point to a number of reasons why our feet are worse off, but perhaps journalist Adam Sternbergh put it best when he said, “Imagine if someone put a cast on your arm when you were three years old and you never took it off. Your arm would stop working. That’s kind of what’s happened with our feet.”

Of course, we can’t all go barefoot all day, but at least at home you can get a reprieve from those devices that have destroyed your feet.

Do you wear shoes indoors? Why or why not? Let us know in the comments below!